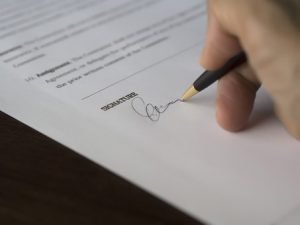 Under New Jersey business law, when two or more parties enter into a contract they are essentially writing their own law which will govern their relationship.  A valid contract – one where each of the parties exchange value (“consideration”) and agree to the terms which will govern their relationship or transaction – will be enforced by courts.  If there is a dispute, a court will make a decision which can be fully enforced.

The Covenant of Good Faith and Fair Dealing

Much of contract law has been developed through the “common law.”  The common law is based on the decisions which courts have made in the face of problems encountered in real world contract law disputes.  The common law provides many remedies when one party breaches the terms of the contract and causes the other party to suffer damages.

However, the common law in New Jersey (and many other states) has gone further than requiring parties to merely follow the letter of the contract.  Rather, New Jersey business law imposes a “duty of good faith and fair dealing” on every party to a contract.  In the seminal case of Sons of Thunder, Inc. v. Borden, Inc., the New Jersey Supreme Court explained that “All contracts, under New Jersey law, include an implied covenant that the parties to the contract will act in good faith.”  More recently, the United States District Court for the District of New Jersey issued a decision in the case of Hills vs. Bank of America explaining the covenant of good faith and fair dealing under New Jersey business law.  The Court explained that “The implied covenant of good faith and fair dealing mandates that neither party shall do anything which will have the effect of destroying or injuring the right of the other party to receive the fruits of the contract.”  The covenant, however, does not replace the contract.  The contract’s terms control the relationship.  The District Court explained that the covenant will allow separate grounds for recovery only in these three limited situations:

(1) to allow the inclusion of additional terms and conditions not expressly set forth in the contract, but consistent with the parties’ contractual expectations; (2) to allow redress for a contracting party’s bad-faith performance of an agreement, when it is a pretext for the exercise of a contractual right to terminate, even where the defendant has not breached any express term; and (3) to rectify a party’s unfair exercise of discretion regarding its contract performance.

What does this mean for parties in a business relationship governed by a contract?  The most important thing is to get a well-written contract which says what you want it to say, and protects you if a dispute arises, as they sometimes do.  Our business attorneys have found that a well-written contract is invaluable for many reasons, but two are of paramount importance.  First, a well-written contract will avoid disputes.  If the terms which set out each party’s rights and responsibilities are clearly defined, then disputes are usually avoided and the parties can have a productive, mutually profitable relationship.  Second, if disputes do occur – and sometimes no matter how well-drafted the contract, a party will just pick the wrong dance partner – the contract will provide remedies to protect the innocent party’s rights.

If you have any contract or business law issues, call (973) 890-0004 or email us to set up an appointment to speak with one of our business attorneys.  We can help.