The Use of Eligible Lists in Hiring and Promotion

Candidates for initial hiring and promotion in the permanent, career, unclassified civil service are selected and appointed based on their 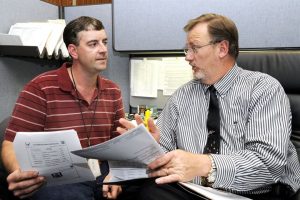 Candidates passing open competitive and promotional examination are placed on open competitive or promotional lists after meeting the requirements for the position.  A “complete” list requires at least three eligible candidates (referred to in New Jersey Civil Service law as “eligibles”).  Qualified candidates are ranked on eligible lists based on their scores and veterans status.   Disabled veterans are ranked first, followed by veterans, followed by non-veterans, all ranked in order of their scores in their respective sections. Employers (also referred to as “appointing authorities under the New Jersey Civil Service Commission’s regulations) are required to hire candidates in order of their ranking on the eligible list.

The Rule of Three

The requirement that appointment be made in strict order of rank is subject to one important exception, however.  This exception is known as the “Rule of Three.”

Under New Jersey’s Rule of Three, when an employer receives a list it may appoint any one of the top three eligible on the list.  Thus, the employer can skip the first two top ranked eligible employees and appoint the third.  For example, in a list with four eligibles for only one vacant position, the employer could appoint the first, second or third highest ranked eligibles, but not the fourth.   This applies to regular, open competitive lists and promotional lists; it does not apply to reemployment lists.

Thus, and employer has the following options for making an appointment from a list, in this order.

The certification will have a “disposition due date”, by which the employer must notify the New Jersey Civil Service Commission of what it did with the list. The report must include a statement of reasons when the Rule of Three is used.  If an employer exercises the Rule of Three and does not choose the top ranked eligible, it must information the Commission and explain why it did so. However, the unsuccessful candidate has no right to see those reasons.

The purpose of the Rule of Three is to give the employer the discretion to choose to appoint whichever of the top three scorers it believes is best suited to fill the first open position.  It can thus bypass the highest one or two interested eligibles. However, courts have explained that the Rule of Three does not increase discretion to hire; it limits it.  Rather than unlimited discretion, the appointing authority only has the narrow authority to hire from the top three interested eligibles.  Thus, the discretion afforded by the Rule of Three is narrow, and must be exercised within the strictures of merit based appointment.

A non-veteran eligible on an open competitive examination who has been passed over under the Rule of Three three times in favor of a lower ranked eligible will no longer be certified, unless otherwise requested by the employer.