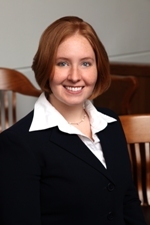 McLaughlin & Nardi, LLC, welcomes aboard the firm’s newest member, Pauline Young.  Pauline M.K. Young joined us when she was a student at New York Law School.  For some reason, after getting to know us she decided to stay.  We could not be happier.  Besides being an excellent attorney, Pauline is, as Reggie Jackson said, the “straw that stirs the drink.”  She is detail oriented, but excels at working with our staff, attorneys, clients, adversaries, judges and juries, and keeping us on an even keel in the most stressful of environments.

Pauline’s practice includes employment law, commercial law, insurance and professional malpractice, tax litigation, business and real estate transactions, solid waste law (including both litigation, transactions and A-901 applications), among a diverse set of cases she has handled.  To say this, however, is give a dry listing of her experience and ignore where her talents lie.  Pauline can be handed the most complex set of problems, figure them out, determine a winning strategy, and pursue it to a successful conclusion.

For example, in one recent case Pauline stepped into a complex construction defect/commercial landlord-tenant case as it was about to go to trial.  She took literally tens of thousands of pages of documents, organized them – but more importantly, in an extremely short time digested and understood them – and put together a winning trial strategy in a case where each side introduced more than five hundred exhibits over two months in a hard fought trial.

Pauline’s range of courtroom experience as first or second trial chair is impressive.  She tried a jury trial for tortious interference in a solid waste contract in Hudson County Superior Court, not only winning for her client, but recovering the full verdict even though the defendant tried to evade paying.  She successfully arbitrated a construction dispute with over four hundred exhibits in the American Arbitration Association.  Pauline tried a complex employment law jury trial in Federal Court, which was appealed twice to the United States Court of Appeals for the Third Circuit.  She has briefed and pursued multiple appeals in Federal and State Court, including the Third Circuit, the Appellate Division of the Superior Court of New Jersey, and the New Jersey Supreme Court.  And, of course, cases don’t just get to trial on their own.  They get there because of Pauline’s hard work and skill beforehand – through depositions, motion practice, document discovery….

Pauline is also an excellent negotiator.  Pauline has negotiated many impressive recoveries for her clients (most of which are covered by confidentiality agreements which preclude us from discussing them here).  However, Pauline’s tenacity, skill, strategic use of evidence, and winning personality have given her an enviable record of success.

Pauline is admitted to the bars of the state and federal courts of New Jersey and New York, and to the United States Third Circuit Court of Appeals in Philadelphia.  She is a graduate of the Richard J. Hughes Chapter of the American Inns of Court.

Pauline received her undergraduate degree from Montclair State University in political science, where she was part of the MSU Honors Program and graduated a semester early.  She was president of chapter of Pi Sigma Alpha, the National Political Science Honor Society, where she organized and chaired numerous academic events. Pauline received the Dean’s Award for contributions to Montclair State’s College of Humanities and Social Sciences, and was also a disc jockey at 90.3, WMSC.  In fact, Pauline was so intelligent it is rumored that they made her live in a special dorm reserved only for the smartest nerds.  In fact, she is so smart that kicking butt at New York Law School, where she received her Juris Doctor degree in 2010, was pretty anti-climactic for Pauline.

In her spare time, she occasionally sees her husband Rich, with whom she lives in Clark, New Jersey.