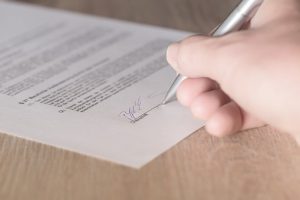 Non-compete agreements are binding contractual restrictive covenants which limit an employee’s ability to compete with her employer after she leaves or while she is employed. These agreements normally prohibit the employee from forming a competing business, and also from directly or indirectly capacity by working for a competitor or soliciting their employer’s customers.

Post-employment restrictive covenants such as non-compete agreements cannot be open-ended. They cannot last forever – generally one or two years, maybe three, are enforced by the courts – and they cannot prohibit a former employee from making a living, so the scope and geography of the restriction must be tailored to what is needed to protect the former employer.

Non-compete agreements can be stand alone contracts, or they can be contractual on a restrictive covenant which is part of a larger employment contract.

Non-compete agreements for key employees are seen as valid mechanisms to protect trade secrets. However, there has been considerable criticism of the trend in recent years to require lower level employees to sign non-compete agreements as a condition of employment. This can have the effect of limiting less skilled and less educated workers’ ability to make a living.

Senator Rubio has introduced the Freedom to Compete Act (the “Act”). The Act would amend the Federal Fair Labor Standards Act to prohibit employers from requiring lower level employees to sign non-compete agreements. Senator Rubio has released a one page summary, which summarizes the essential points thus:

….the Freedom to Compete Act would:

• Apply only to employees who do not qualify for the FLSA’s minimum wage and overtime exemption for bona fide executive, administrative, professional and outside sales employees;
• Prohibit an employer from enforcing, or threatening to enforce, a non-compete agreement with a non-exempt employee;
• Prohibit an employer from entering into, extending, or renewing a non-compete agreement with a non-exempt employee; and
• Be enforced by the Department of Labor under the existing FLSA framework for minimum wage and overtime violations.

Thus, the Act protects any employee who is required by law to receive minimum wage and overtime.

However, the Act also protects employers by allowing them to still enter into agreements with employees – including employees at all levels – which prohibit them from disclosing trade secrets, as does the New Jersey Trade Secrets Act.

One area which critics have complained of about the Act is that it might encourage employers to mischaracterize employees as “exempt” under the FLSA so that they could still force low level employees to sign non-compete agreements. Indeed, this is an area in which a good number of employers already mischaracterize workers as contractors rather than employees to avoid paying overtime, minimum wage, benefits and payroll taxes.

However, by not applying to exempt employees and protecting trade secrets, the Act is a sensible balancing of employees’ and employers’ interests.

The Act has not yet been voted upon in the Senate. We will keep you updated.

We represent employers and employees in all areas of employment law, including restrictive covenants, non-compete agreements, and the classification of workers as contractors or employees. Call us at (973) 890-0004 of fill out the contact form on this page to schedule a consultation with one of our New Jersey employment attorneys.