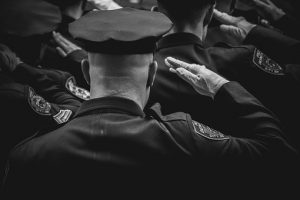 New Jersey employment law provides that permanent police officer may not be disciplined except for “just cause,” or have her employment terminated for political reasons – or indeed any reason “other than incapacity, misconduct, or disobedience of rules and regulations established for the government of the police department.”  An officer may be disciplined only after she receives notice of the charges against her and is given a fair and impartial hearing.  The specific language of the statute provides:

Except as otherwise provided by law, no permanent member or officer of the police department or force shall be removed from his office, employment or position for political reasons or for any cause other than incapacity, misconduct, or disobedience of rules and regulations established for the government of the police department and force, nor shall such member or officer be suspended, removed, fined or reduced in rank from or in office, employment, or position therein, except for just cause as hereinbefore provided and then only upon a written complaint setting forth the charge or charges against such member or officer. The complaint shall be filed in the office of the body, officer or officers having charge of the department or force wherein the complaint is made and a copy shall be served upon the member or officer so charged, with notice of a designated hearing thereon by the proper authorities, which shall be not less than 10 nor more than 30 days from date of service of the complaint.

The basic procedures were laid out in 2013 by the New Jersey Supreme Court in the case of Ruroede v. Borough of Hasbrouck Heights.  In that case charges were brought against a municipal police lieutenant for misconduct in several broad areas.  The first involved abuse of  disability leave and leaving the state without proper permission while on disability leave.  The second involved an incident in which the lieutenant brandished a weapon in a drunken bar fight against a superior officer from a  neighboring jurisdiction and lied about it in the subsequent investigation.  A hearing was held in which the hearing officer recommended termination, which the municipality followed.  The lieutenant appealed alleging irregularities in the hearing, and judges in the Superior Court and Appellate Division agreed, remanded the case for another hearing, and awarded the lieutenant back pay.  The municipality then appealed and the New Jersey Supreme Court reversed and upheld the termination.  The facts of the case are more complicated, but in its opinion the Supreme Court laid out the procedures for non-civil service police discipline cases under New Jersey employment law.

A hearing must be held on the charges filed and punishment sought by the municipality. If the discipline is upheld in a jurisdiction which has adopted the civil service system, the officer may appeal to the New Jersey Civil Service Commission, and the officer’s hearing will be conducted by an administrative law judge in the New Jersey Office of Administrative Law.

However, this remedy is not available in non-civil service jurisdictions. Rather, the Legislature has provided for appeal through the judicial system.  The statute specifically provides that in non-criminal matters: “Any member or officer of a police department or force in a municipality [which has not adopted civil service], who has been tried and convicted upon any charge or charges, may obtain a review thereof by the Superior Court.”

Appeal from the discipline at the municipal level is made to the Law Division of the Superior Court of New Jersey, which then conducts a “de novo” review on the record below – ie., it reviews the evidence submitted at the municipal level and makes its own decision based on that evidence.  Live testimony is not required.  The employer again bears the burden of proving the charges by a preponderance of the evidence.  The officer has the right to bring counsel to the hearing, and may obtain subpoenas to compel the appearance of witnesses.  While the judge’s de novo review is based on the record below, she has the authority to permit the parties to supplement the record below with new evidence.  A Superior Court judge in the Law Division, reviewing the discipline, may only accept, reject or modify the appointing authority’s disciplinary conviction of the officer.  The Superior Court judge may not remand to the municipality for a new hearing.

The Appellate Division of the Superior Court recently had the opportunity to apply these principals in the unpublished case of Joseph Dibuonaventura vs. Washington Township, decided on March 25, 2019.  In that case the municipality alleged the officer falsified his report in a DUI case against a state assemblyman and sought his termination.

Given the nature of the charges – dishonesty – the hearing officer decided that termination was “the only appropriate remedy.”  The officer was terminated and appealed to the Superior Court, which agreed.  The officer then appealed to the Appellate Division.  The Appellate Division found that the hearing officer and Superior Court had properly followed the procedures laid out in the Ruroede case.  A main issue was what the proper penalty should be.  The Appellate Division upheld the termination despite the doctrine of progressive discipline.  Progressive discipline, which is applicable to both civil service and non-civil service discipline, holds that an employee’s past conduct is relevant to the penalty for a present offense.  Thus, a first offender should ordinarily receive a lighter punishment than a habitual offender.  However, this is an elastic concept, and some infractions are so severe that termination is appropriate for even a first offense.

Dishonesty is among the first offenses which might warrant immediate termination.  This is because society places such great power, trust and authority in police officers – indeed, a police officer’s word can send someone to prison for a long time.  Likewise, dishonesty by a police officer must be disclosed to defendants, which can then be used by the defendant on cross-examination of the officer, which could cause a jury to disbelieve an officer, and thus let a guilty criminal go free.

Our employment lawyers represent law enforcement officers in civil service and non-civil service hearings and appeals.  Call (973) 890-0004 or fill out the contact form at right to schedule a consultation with one of our attorneys.  We can help.