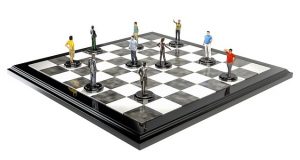 Bell wrote Local 813 that Hejda needed to be recertified pursuant to the U.S. Department of Transportation’s Federal Motor Carrier Safety Regulations and have the required form returned to the company.  Hejda declined to submit to an examination by the company’s doctors, and the union filed a grievance alleging that the company’s actions violated the collective bargaining agreement.  Hejda received a certification from his family physician, and later a company physician, both of whom cleared him for work.

An arbitrator denied the grievance, however, and required he be left out of work until he received the proper form and medical certification, although the arbitrator did not address the examination by the company’s doctor.  In a separate action, Hejda was found eligible for workers compensation claims, and Bell’s appeal was denied.  Hejda also filed a claim for discrimination in the New Jersey Department of Labor’s Office of Special Compensation, claiming that he was discriminated against because he filed a workers compensation, but an administrative law judge denied the claim because he had not been cleared for work and Bell had no requirement to reinstate an employee who had not received the proper certification.

Hejda then submitted a second certification from his doctor which he claimed met the federal requirements.   Bell reinstated him, but switched him from being a driver during the day  to a switcher on the night shift.

Hejda’s Lawsuit in the Superior Court of New Jersey

Hejda then filed a lawsuit in the Law Division of the Superior Court of New Jersey claiming that Bell’s refusal to reinstate him, and then the subsequent switch to a different job on the night shift, were retaliation for filing a workers compensation claim in violation of New Jersey’s Workers Compensation Law and disability discrimination in violation of New Jersey’s Law Against Discrimination (known as the “LAD”).  Bell filed a motion to dismiss Hejda’s complaint, asking the judge to throw the lawsuit out because it was preempted by the Federal Labor Management Relations Act (the “LMRA”), because his suit required “an interpretation and application” of the terms of the union contract which was governed by the LMRA.  The trial judge in the Superior Court agreed and threw out Hejda’s lawsuit.

The appeals court found that while section 301 of the LMRA may preempt the jurisdiction of New Jersey’s employment laws on questions about union contracts, in this case it did not apply because the resolution of the state law claims – the disability discrimination and retaliation for filing a workers compensation claim – did not require interpretation or application of the union contract.  The fact that there may have been a parallel claim and remedy under the union’s collective bargaining agreement did not change the fact that Hejda had an independent claim for retaliation and discrimination.

The Appellate Division relied primarily on the New Jersey Supreme Court’s August 2016 decision in Puglia v. Elk Pipeline, Inc.  In that case the Supreme Court held that section 301 of the LMRA did not preempt a retaliation claim under New Jersey’s Whistleblower Law (officially known as the New Jersey Conscientious Employee Protection Act, or “CEPA”).  Just as in the Puglia case, Hejda’s retaliation and discrimination claims existed independently of the union contract, and did not require interpretation or application of the union contract to exist.

While a union contract may exist and give an employee a remedy for an alleged wrong by her employer, the existence of this remedy by itself will not bar a lawsuit for violation of a civil right, such as the right to be free from discrimination, retaliation for filing a workers compensation claim, or retaliation for a whistleblower claim.

Our employment attorneys represent New Jersey employers and employees in all aspects of the employment relationship.  To schedule a consultation with one of our employment lawyers email us or call (973) 890-0004.  We can help.