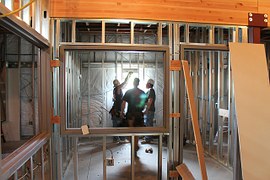 JHC Industrial Services, Inc. subcontracted to do demolition work on a project for Centurion Companies, Inc., which had in turn subcontracted with the general contractor to perform the work.  JHC performed the work in full, and the general contractor accepted the work and paid Centurion in full.  However, Centurion withheld $30,500 from JHC for no apparent reason other than not wanting to pay.  JHC therefore filed a construction lien against the property and sued Centurion in the Superior Court of New Jersey for violation of the New Jersey Prompt Payment Act.  The matter took two years reach conclusion.  A trial was held, and JHC prevailed on all its claims.  JHC won and received judgment against Centurion for $30,500, the full amount it claimed was owed.  JHC requested $104,670.51 in “reasonable costs and attorney fees” pursuant to the fee shifting provisions of the Prompt Payment Act.  The trial judge, however, awarded only $12,250.40 in attorneys fees and $4,125.33 in litigations costs for a total award of $16,375.73.  The judge explained that he did not believe he could “grant over $100,000 in fees on a judgment that could not have exceeded $30,500.”

The Prompt Payment Act is a fee-shifting statute that makes an award of “reasonable costs and attorney fees” mandatory to a prevailing party. [The New Jersey] Supreme Court has expressly “decline[d] to construe New Jersey’s fee-shifting statutes to require proportionality between damages recovered and counsel-fee awards even if the litigation… vindicates no rights other than those of the plaintiff.”

The Court explained that the purpose of the Prompt Payment Act was to ensure that subcontractors are fully paid in a timely manner.

One of the key elements stressed by the Appellate Division was how blatantly and purposefully Centurion dragged the matter out, knowing it had no defense.  In fact, Centurion’s project manager testified that he threatened JHC “right up front if you put a lien on the job, I’m going to bond it, and I’m not going to pay you.” It then proceeded to drag out payment and litigation for years.  The Court set out in great detail all the actions Centurion took to do just this.  The Court thus explained that the reason for the size of the fees and expenses was Centurion’s own unreasonable delay.

However, the Appellate Division explained that the vexatiousness of Centurion’s conduct was not the key here.  Courts should award attorneys fees and litigation expenses under the Prompt Payment Act not because the defendant was bad, but because the point is that in order for a subcontractor to get paid and be made whole, it must be able to retain competent counsel. Thus, the point of the fee shifting provision is to attract competent attorneys to enforce the subcontractor’s rights.  The fees must have been both reasonable and reasonably necessary, of course, which a  trial Court should review under the “lodestar method.”  However, this does not include a requirement that the fees be proportional to the amount recovered.  Centurion’s conduct is a good example of why this is necessary.  If the case was taken on an hourly basis and the fees incurred were not reimbursed, JHC would have won but still owed its attorneys more than it won from Centurion.  Likewise, if the case was taken on a contingency basis, the recovery would not attract good attorneys to take the case because their fees would have been only a fraction of their effort.

The New Jersey Prompt Payment Act remains a powerful tool for contractors and subcontractors to get paid, not least of which because of its fee shifting provisions.